A Bete master carver: the master of the contented person.

This is one of the rare, large, Bete figures that are known. These figures depict a deceased chiefs. It is a wooden statue, height 87 cm.

The clothing consists of a short-sleeved jacket with pointed collar and four flapped pockets. The scarification on the back of the neck resembles the one around the navel of no.6. (Museum Barbier-Mueller has a Bete figure with a similar jacket: height 44.7 cm, inv. 1007-202.) There is an old iron repair to the left foot. The image comes from Reginald Groux.What makes this even more special is that the sculptor is well known.

2. Here we see a picture of a famous sculpture from the Museum of Abidjan, Ivory Coast. It is of the same sculptor.
Height 80 cm. This picture was exhibited in 1985 in the Rietberg Museum in Zurich. Then in Grand Palais, Paris, in 1989. It was also published in ‘Die Kunst der Guro’ and in ‘Corps sculptés, corps parés, corps masqués. Chefs-d’oeuvre de Côte-d’Ivoire.’ It is said to be the work of a sculptor from the area round Daloa.

3. This figure was first exhibited at Galerie Alain Bovis in 2004. This image was acquired by a Frenchman who lived in Ivory Coast in 1922. It was never published before. Again the eyes, mouth, arms, hands, calves and toes that resemble each other.
Material wood, height 74 cm. Published in: ‘Arts sacrés de Côte d’Ivoire’. Galerie Alain Bovis, Paris September 2007. 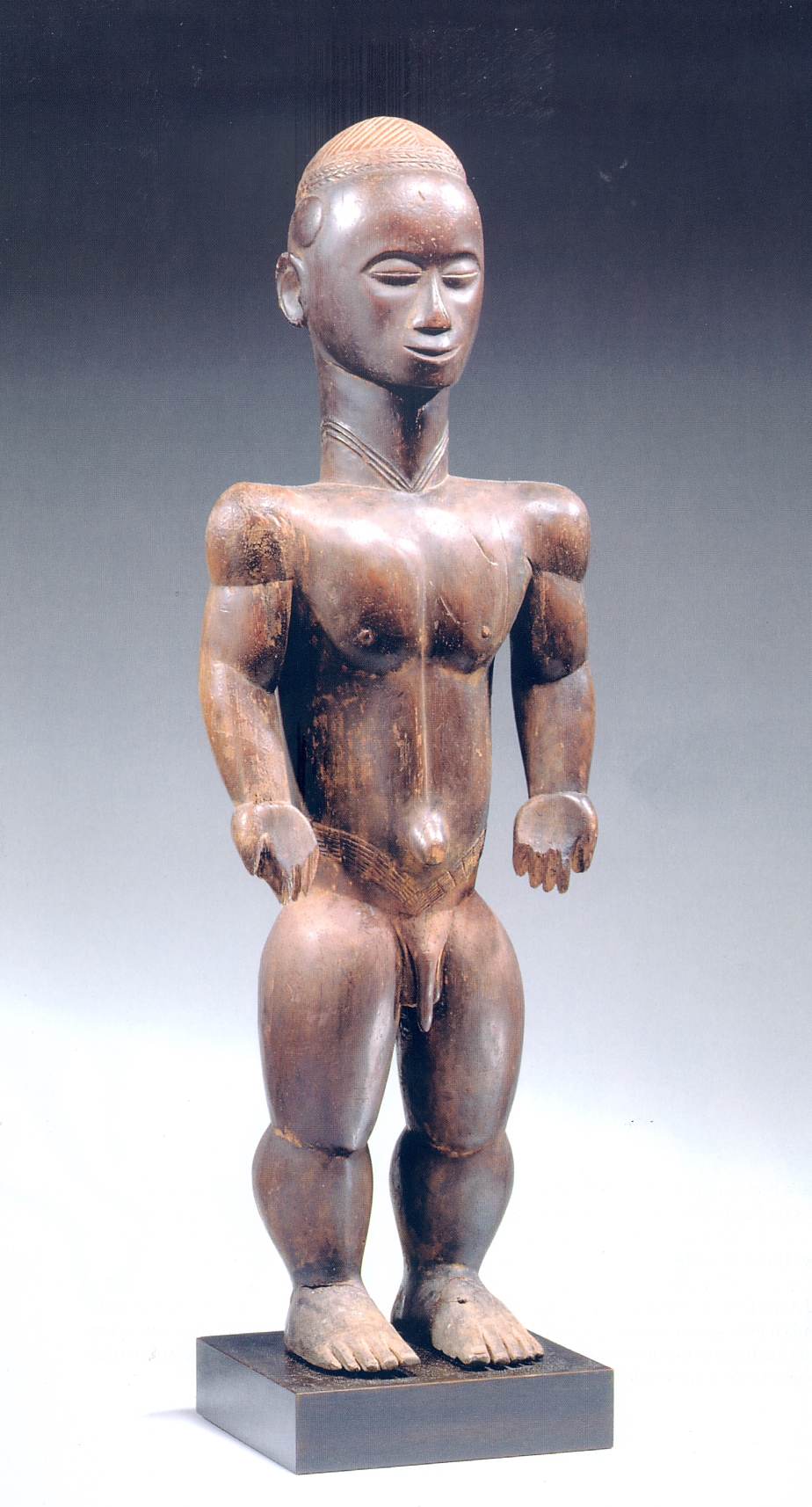 4. This figure was photographed in by Ferry Herrebrugh. It is or was property of Lucien van de Velde. He bought it from Baba Keita, Abidjan, in the 80th (info Guy van Rijn).
It is published in ‘Kust der Elfenbeinküste, / Art of Ivory Coast’ by Karl Ferdinand Schaedler, Munich 2001. Also in ‘Kunst aus Schwarz-Afrika by Burkhard Gottschalk.
Height 83 cm. Besides all the aforementioned similarities, here too the tatouage is the same as in our first picture. 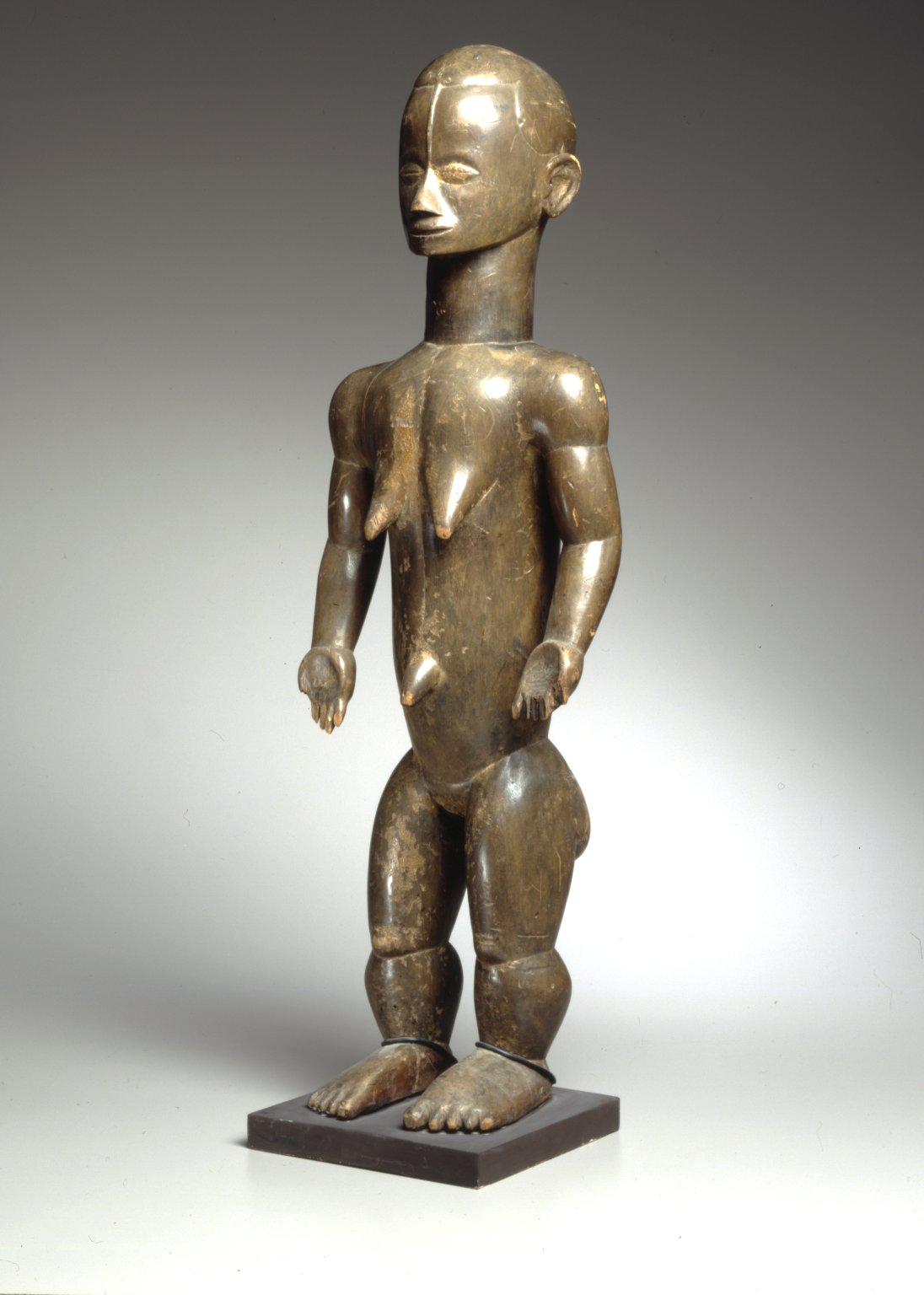 5. This figure has been donated to the Brooklyn Museum in 1956. Height 72,5 cm, 19th century. A scarification on the forehead.

‘Your question prompted me to examine the work a bit closer – and you do make an interesting case for it potentially belonging to the same hand/workshop you’ve identified on your site. When I examined the back, I do not recall finding scarification marks.

As to the age, it is of course a relative approximation, based on its wear and provenance. We know that the work was purchased from Julius Carlebach by Millicent Rogers, an heiress and important mid-century American collector. The work passed to her sons Arturo and Paul Peralta-Ramos in 1953; it was acquired by Brooklyn in 1956. Given that limited information, the work could likely be dated to the early 20th century, as well.’ 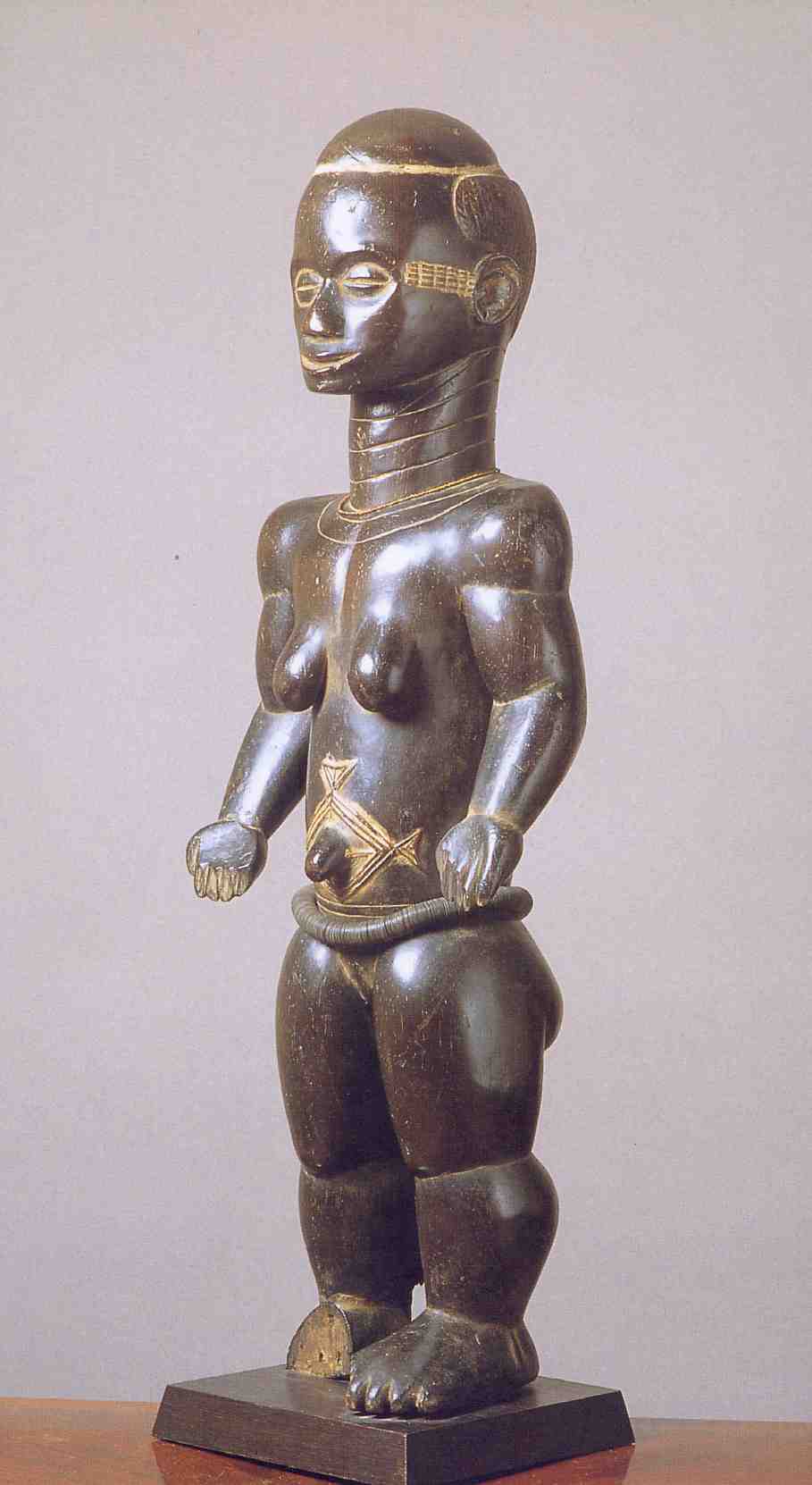 The height is 75 cm, it belongs to a Belgium private collection (Xavier Hufkens, Brussels). The object comes from the region of Daloa, a major Bete city in central Ivory Coast.

7. Guy van Rijn sended us this picture. This figure was in the collection of Maurice de Vlaminck (1897 – 1980), Paris. He was one of the artist who decouvered African art in Paris. Pablo Picasso was among them. The smile and the hands are a little bit small.

This figure resembles figure number 3. The hairstyle with fiber is particularly. A bete figure from the Leyden collection (Sotheby’s December 5, 2007 nr. 9) also has a hairstyle made from fiber. This figure and a figure in the collection of the Museum Nationale d’Abidjan is sculpted by anaother master. It is sold for € 700.000.- to the Musée de Quai Branley. Another figure from the same workshop is in the collection of the Náprstek museum, Prague.

The Náprstek Museum has two figures with a small smiling mouth from the region of Gagnoa, but carved in a different way. They also have two figures (no. 26,589 and 9,415) who have similarities with ours (same workshop?) It seems to derogate. A different sculptor but the same workshop?

Also number six seems to deviate. In particular, the shape of the breasts is different. It will originate from the same workshop. Also not included is in my opinion the Bété image of the Barbier-Mueller Museum inv. 1008-14. The style resembles, but the relationship between the torso and the legs is different. Again, it is not excluded that this is the same workshop.

In short, our image is part of a series of six large images that are attributable to the same important Bete master. Because of the expression on the face we call him ‘the master of the contented person’.

According Holas (1968), who was one of the few would have performed fieldwork in the Bete area (or his assistant, M. Kofie), it concerns the ancestral statues. The Bété live in about 90 autonomous communities.

Finally, the jacket that the Bété figure  no. 1 bears. There is another picture from a Bété statue with such a jacket. It is part of the collection of the Barbier-Mueller Museum and published in ‘Art of Côte d’Ivoire “, 1993. Marie-Noël Verger–Fèvre writes this:

‘The clothing consists of a dark blue short-sleeved jacket with pointed collar and four appliquéd flapped pockets.    the belt and the shorts are carved in bas-relief.’